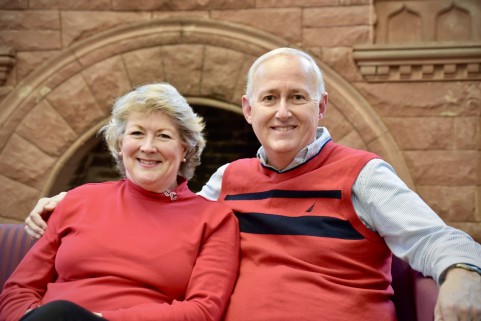 Our new ICF Moderator, Mike, is married to Judy who is the Director of the Burrage Library at Olivet College in Michigan (USA) where they have both worked for the last twenty-eight years. Olivet College was founded in 1844 by Congregational missionaries who were abolitionists. It was the first college in Michigan and one of the first in the U.S. to admit students of color and women to a four-year degree program. Today, it still primarily educates first-generation college students.

Mike and Judy raised three sons in their 130-year-old house across the street from campus. Doug works in furniture and appliance sales and is married to Kaitlyn who works at a Women’s shelter. They have a three-year-old son, Lennon. The FIRST grandchild! Tom is non-verbal and autistic. He lives in a small group home near St. Johns, Michigan where he likes to watch old-school cartoons like Tom and Jerry on his tablet. His twin brother Charles is a Ph.D. candidate at Central Michigan University with a teaching fellowship in Industrial Organizational Psychology.

Mike and Judy met in Washington, D.C. when Mike was at GWU and Judy worked in the U.S. Senate. Mike relishes being the family cook. He and Judy love to travel and post-COVID are anxious to visit you!